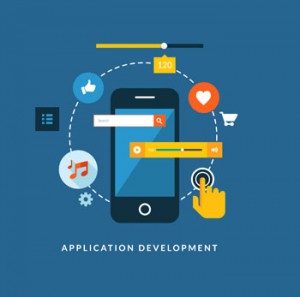 APPLE: 3 iOS App Development Trends for 2015. What’s does 2015 hold for the iOS apps market? This is probably one of the most trending topics among enterprises and the overall iOS app development world. There are more than 1.4 million apps on the App Store right now; competition in the apps market is therefore at an all-time high. While the most popular apps (the top 1 percent) enjoy a majority share of the market, a typical mobile app usually gets less than 1,000 downloads. Read more
[TECH.CO]

BUSINESS APPS: 2015 Predictions: Enterprises Set To Take App Development In-house. Mobile applications continue to explode, and there is a new trend among enterprise application developers. With the pervasiveness of smartphones and tablets, the delivery vehicle is in place for businesses to expand with new mobile services to reach their customers. Businesses no longer need to engage with costly and lengthy application developer programs since they’re able to build new business and customer applications with a few clicks. Read more
[RCRWIRELESS.COM]

RAD TOOLS: Rapid Application Development: Moving the Problem to the Right. We hear it all the time: As the development queue grows, so does the pressure on IT to deliver. Managers and executives want mobile applications yesterday, and IT is struggling to simply keep its head above water. As a result, many IT organizations are on a mission to reduce development time. Read more
[APPDEVELOPERMAGAZINE.COM]

MICROSOFT: Internal Memo Reveals Plans To Spur Windows App Development. IT pros who use Windows, Azure and Microsoft’s mobile platforms may begin to see far more applications this year. Microsoft is readying a concerted push to capture a wider set of developers over the next year who have yet to deliver applications for the company’s Windows, cloud and mobile platforms, according to a source with knowledge of the plans. Read more
[TECHTARGET.COM]

IT SPENDING: Cybersecurity Gets Big Boost in 2016 Budget. Recognizing the increasing breadth and depth of attacks on government IT systems, the Obama administration has allocated more money for cybersecurity in its 2016 budget in an effort to strengthen defenses and make cyberspace more secure. Read more
[GCN.COM]

CFAA: Experts Speak Out About Proposed Changes To Hacking Law. President Obama is proposing changes to the Computer Fraud and Abuse Act, but will they do more harm than good? Experts are starting to weigh in on the topic, and the reviews so far are mixed. On one side, the administration has made some concessions, which are useful. Yet, some of the punishments are overly severe and the wording in the proposal is vague in parts. Read more
[CSOONLINE.COM]

MARKET FORCES: 3 Cyber Security Lessons From Super Bowl XLIX. Super Bowl XLIX was full of surprises. As anyone in IT can attest, cyber criminals are full of surprises too — and proper preparation is key to fending off their attacks. Below are three lessons one can draw from this year’s Super Bowl to better inform one’s own cyber security policies and practices. Read more
[INFORMATIONWEEK.COM]