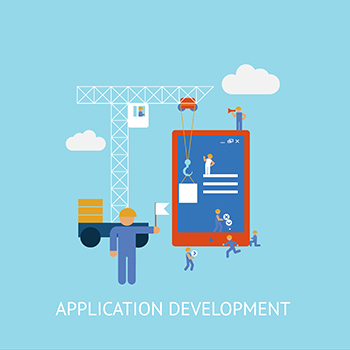 PROS AND CONS: 5 Reasons You Shouldn’t Build A Custom App. People have become accustomed to having everything they need immediately at their fingertips. This may seem unreasonable, but today if you cannot give your clients instant gratification it reflects poorly on your business and competency. As a result, many operations are turning to software applications to keep up. Read more
[BUSINESS2COMMUNITY.COM]

STRATEGY: No Mobile App Developers? Turn To Low-Code Tools. With so many enterprises looking to adopt mobile apps, it’s getting harder to find qualified developers, but the vendor market is adjusting to provide IT with tools to simplify mobile app dev. Read more
[TECHTARGET.COM]

NEW DEV TOOLS: How Containers Change Everything. Modern application development owes much to the growth of the devops movement and the automation tools it has delivered. Instead of just writing code, developers now need to think in terms the tools they’re using — and how they fit together in a flow from initial idea to a live application. Read more
[INFOWORLD.COM]

GITHUB NEWS: NSA Cybersecurity Tool Now Publicly Available. he National Security Agency released a cybersecurity tool publicly to GitHub that lets computers maintain a defined security posture.
The tool, called the Systems Integrity Management Platform, or SIMP, was posted on the source code-sharing website to make it easier for government organizations and private industry to use the tool to fortify their networks against cyber threats. Read more
[FIERCEGOVERNMENTIT.COM]

CLOUD-FIRST: Delivering an Agile, Open Government Cloud for Less. Today, most divisions within the federal government-and many at the state and local levels-have “cloud-first” policies with the goal of migrating much of their IT operations to the cloud. Simply put, not all clouds are created equal-and how you move to the cloud and which cloud you move to can have a dramatic impact on the total cost of ownership (TCO). Read more
[MICROSOFT.COM]

FACILITIES: Agencies Drag Employees Toward Open-Office Designs. An exclusive Federal News Radio online survey shows feds are happiest when they work in offices where they can close their doors. Cubicles and open spaces with little separating them from colleagues are a recipe for distraction and lower productivity, they say. Read more
[FEDERALNEWSRADIO.COM]

CONGRESS NEWS: House Bill Would Halve Digital Services Request At DHS. Lawmakers pushed back on an administration request for $10 million to fund a digital services team inside the Department of Homeland Security as part of a $47.6 billion DHS funding bill the House Appropriations Committee approved 32-17 on July 14th. Read more
[FCW.COM]

FYI: Federal & State CTOs CIOs CISOs: Daily Tech Update – August 28, 2015
Tagged on: 5 reasons why you shouldn't build a custom app    Blue Mountain Data Systems    how containers change everything    how to deliver an agile open government cloud for less    Paul Vesely    what are low-code tools    what should I do if I don't have access to mobile app developers    why users won't tolerate sub-quality enterprise apps