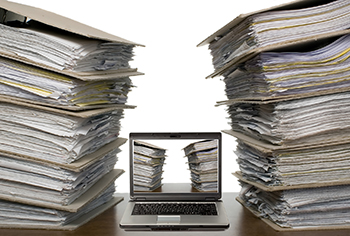 INDUSTRY NEWS: How Advanced Scanning and Archiving Can Help Academic Institutions Streamline Workflows. Scanning and archiving has become essential – and sometimes legally necessary – to keep pace in today’s business world. Document scanning is an efficient way to store building, engineering, and architectural drawings as well as your everyday business files in a secure and searchable location. However, scanning and archiving of large format technical documents and drawings is still an often underutilized process. Read more
[THOMASNET.COM]

E-DISCOVERY SERIES: Document Automation Helps You Sleep Better At Night. Attorneys who understand how document automation works and the benefits it brings are well positioned to develop a strong business case for introducing the technology to their organization. The first article of this three-part series offered an overview of the basics of document automation. Read more
[INSIDECOUNSEL.COM]

PRIVACY BREACHES: How Private is Your Private Data When It Comes to eDiscovery? Home Depot, IRS, Chase, and Ashley Madison — no one is safe anymore from security breaches or data privacy leaks. It is not a matter of ‘if’ but generally a matter of when some form of your private data will be compromised. A breach always truly reveals how private that ‘private’ data really is. Let’s take a moment and discuss some of the potential privacy breaches when it comes to eDiscovery. Read more
[BNA.COM]

LAWSUIT: Appeals Court Upholds FTC Authority Over Data Breaches. Any organization that’s been the victim of a cyber attack has a host of stakeholders to deal with, not the least of which is the applicable regulatory authority, either state or federal. Any businesses hoping that the Federal Trade Commission (FTC) would lose some of its authority in pursuing companies following cyber breaches have been sent a clear signal by an appeals court. Read more
[PROPERTYCASUALTY360.COM]

MORPHOTRUST: Iowa Begins Testing Digital Driver’s Licenses On Your Smartphone. Last year, we told you about Iowa’s interest in launching digital driver’s licenses, a move that might begin the phasing out of plastic licenses currently in use nationwide. As a result, the state recently announced live testing of what it calls the Mobile Driver License (mDL) in a number of settings, but that testing will be limited to hundreds of Iowa Department of Transportation employees. Read more
[MASHABLE.COM]

CONNECTED SIGNALS: Tech Startups Want To Change the Way You Drive. It’s no secret that technology is changing the car industry. The major automakers, as well as tech giants such as Google and possibly Apple, are laying the groundwork for the first driverless cars. Meanwhile, a number of engineers and entrepreneurs have started their own companies to tackle other automotive challenges. Read more
[TOPTECHNEWS.COM]

TOUCH TAIWAN 2015: This Smartphone Is Actually Supposed To Bend. Remember when the iPhone 6 Plus was released last year, and some users reported that the phone was so big, it was actually bending after they put it in their pockets? This even became a bit of a controversy, so much so that the ordeal got its own name, Bendgate. Read more
[TECHTIMES.COM]

MICROSOFT: 10 Things You Should Know About Upgrading To Windows 10 [VIDEO]. Even if your computer or tablet is eligible and can run Windows 10, there’s a good chance you might not be able to upgrade to the new OS for a while. But don’t fret — if you need to know when you might get it, how to install it, system requirements, what’s new and more, we’ve got you covered. Read more
[COMPUTERWORLD.COM]