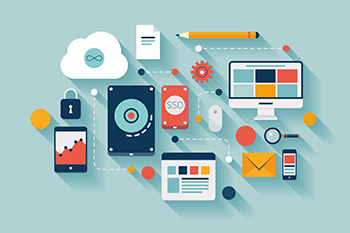 MERGER: HP Enterprise to Spin Off, Merge Services Business. Deal with Computer Sciences creates IT-services provider with $26 billion in annual revenue. Hewlett Packard Enterprise Co. said it would spin off most of its technology services operations and merge them with those of Computer Sciences Corp., the company’s latest adjustment to a shifting landscape that is roiling the market for corporate technology. HP Enterprise will shed a business that accounts about 100,000 employees, or close to half of the Silicon Valley giant’s workforce. Read more
[WSJ.COM]

MODERNIZATION: CIO Scott Pushes $3.1B IT Fund as Congress Probes Legacy Tech. Obama administration officials want Congress to back a revolving fund to modernize legacy IT systems. The goal is to kick-start projects with money agencies will pay back into a fund administered by the General Services Administration. In this way, $3.1 billion in initial funding would support upwards of $12 billion in modernization spending over a decade. Read the rest
[FCW.COM]

FEDERAL GOVERNMENT TECH: ‘Ticking Time Bomb?’ The Department of Defense still uses a 1970’s IBM Series/1 computing system – including 8-inch floppy disk drives – to coordinate operations of the United States nuclear forces. Two of the Treasury Department’s tax systems, which retain tax data for more than 100 million Americans, assess refunds and update taxpayer accounts, are running on “low-level computer code” that was written 56 years ago. Those are just a few of the most egregious examples of outdated technology still in use by the government highlighted in an audit by the Government Accountability Office that will be presented to Congress May 25. The congressional watchdog for years has been touting the need to modernize IT systems or risk excess billions in spending and untold security risks. Find out more
[NEXTGOV.COM]

HEALTH CARE: When Mergers Fail Because of Clashing Work Culture. The Wall Street Journal got a hold of correspondence Monday that suggests there may be some tension between insurance giants Anthem and Cigna, two companies that have proposed a $48 billion merger. Read more
[MARKETPLACE.ORG]